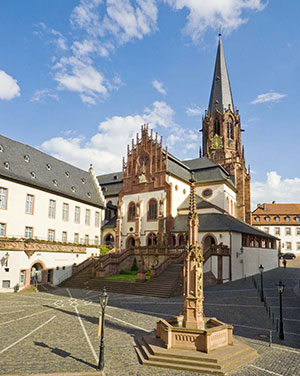 The historic ensemble of Stiftskirche and Chapter House 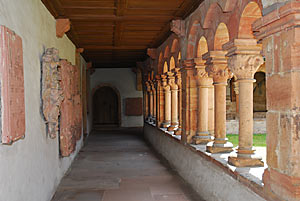 View of the cloister build 1220 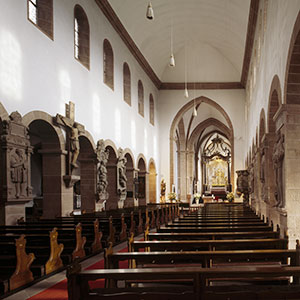 The crucifix, which dates back to the foundation of the Stiftskirche, is among the most important sculptures of its kind in German art and is today situated on the wall next to the nave.

For close to a millennium the unique ensemble of the late Romanesque Collegiate Church Stiftskirche St Peter and Alexander, with its famous cloister and complex of medieval chapter buildings, has stood above the “Stiftsberg” in Aschaffenburg, to form a self-contained historic unity. Since 1861 the Aschaffenburg Stiftsmuseum has been housed in the buildings of the former Chapter.

While the establishment of the Chapter St Peter and Alexander can be traced back to members of the family of Emperor Otto I the Great (912-973), historical records also reveal that it was founded before it gained its official charter in 957. The founders, Duke Luidolf of Swabia (oldest son of the Emperor) and his wife Ida, gave way to a thousand year long religious tradition in Aschaffenburg and their son, Duke Otto of Swabia and Bavaria, richly endowed the Chapter after his father’s death. Following the death of the young duke during a crusade in Italy in 982 his remains were returned and buried in the Stiftskirche. The church and its immense estate passed into the hands of the Dioceses Mainz and the Chapter as well as the town of Aschaffenburg remained the property of the Archbishops of Mainz until 1803.

The Archbishops of Mainz were the most important ecclesiastical lords in the Holy Roman Empire of German Nations and were members of the Electoral College, which was responsible for the election of the German king. As Arch-chancellor of Germany the Archbishop of Mainz was also the highest imperial official in what was the complicated political constellation of the Empire. His influence was immense and the importance of Aschaffenburg as second residence of the Archbishops is manifest in the impressive Renaissance castle Schloss Johannisburg.

The highly educated Cardinal Albrecht of Brandenburg (1490-1545) was an outstanding personality among the Archbishops of Mainz and his interest in religious representations led him to commission important artists such as Lucas Cranach the Elder, Mathis Neithart Gothart, called Grünewald, and Peter Vischer the Younger. Traces of such commissions can still be found today in the form of many famous artworks located in and around Aschaffenburg.

The “Altar of Saint Magdalene”, a key work of German painting made during the time of the Reformation, arrived in Aschaffenburg in 1541 when Albrecht of Brandenburg moved to his new residence. In 1525 Albrecht of Brandenburg commissioned one of the most important artists of this period, Lucas Cranach and his workshop, to produce the altarpiece. Its panels depict life-size portraits of saints while the spectacular central panel shows the Resurrection of Christ.

The Treasury of St Peter and Alexander is one of the most significant medieval German church treasures, and works such as the two silver busts of the patron saints of the church are internationally renowned. The works of the Treasury still illustrate the strong bond that exists between the artist or client and the concepts of Christian faith. Seen in this light the correlation between splendour and faith was not and is still not contradictory. Beholders of the Middle Ages would have seen the effigy of God’s grace and his ministry on earth in the skill of the artist and the preciousness of the material used.